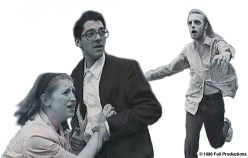 Saturday Night Zombies is the B-movie that Jimmy watches on the TV in the opening scenes of Foiled. To avoid potential copyright problems we went out and filmed it ourselves!

Well, to be honest, we didn't go out and shoot an entire movie when only a few scenes would ever be shown - the original script pretty much dictated what we'd see on the TV screen. So we got hold of three friends, a camera and tripod, and headed out into the woods to capture the magic three minutes. Check out the diary entry to see how the day went!

We never really intended for a full plot to exist for Saturday Night Zombies, just the scenes we required. But a small amount of creativity in the car on the way to shoot it gave us a few ideas on what might have happened up to the point where we first join it. Actually most of these ideas came from the actors themselves I think.

Bob was at an evening meal with some friends when a typical B-movie catastrophe occurred and all his friends were either killed by zombies or turned into zombies. Bob alone escaped. Somehow he ends up in a hospital where the staff are under seige by yet more zombies. Here he meets and falls in love with Kate, a nurse. They evade the dim-witted zombies and run from the town towards nearby woods where they hope they'll be safe. 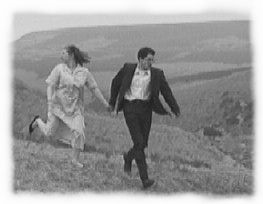 Bob and Kate run across the hills

And it's at this point that the Saturday Night Zombies scenes we filmed appear. Bob and Kate run into the trees, closely followed by a lone zombie. Kate falls and twists her ankle - forcing a confrontation. Bob takes action but the zombie, although it lacks basic intelligence, is too strong and hurls Bob against a tree, then turns on Kate.

Just as we think it's all over, Bob recovers and thwarts the attack. But the danger is far from over...

Actually, the scenes do in fact have meaning within the context of Foiled itself. Towards the end of Foiled Jimmy and Laura are chased into some woods by Foil Man in scenes reminiscent of Saturday Night Zombies. Life imitating the movies. Except the scenes are twisted a little; just when you think you know what's about to happen (primed by Saturday Night Zombies earlier) it goes off in a different direction.